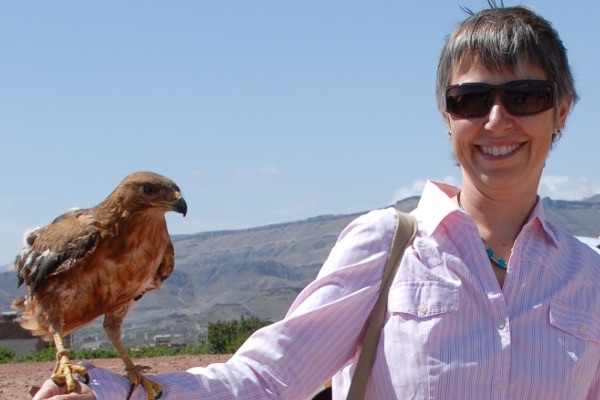 My name is Claire. Some of you may have already met me online, but for those who haven’t, here is a bit about me: I have recently joined the Heurist team to assist Ian, mainly with helping people using Heurist, plus a little bit of documentation and bug-catching; and down the track, (watch this space!) Heurist training materials.

I first met Ian at the Archaeological Computing Laboratory back in 1993, when I visited Australia having completed my MA in Archaeology at the University of Cape Town in South Africa, using the GIS, known in those days as Arc/Info, to analyse intra-site spatial patterning at the Late Stone Age site of Dunefield Midden in the Western Cape. Having kept in intermittent contact through the years at conferences such as CAA and UISPP, it was only natural that in 2009, when I was hired to look after the spatial and other data for a World Heritage Site nomination project in Bahrain (“Pearling, Testimony of an Island Economy”, granted World Heritage status in 2012), I turned to Ian for advice and he recommended Heurist.

GIS work leads one to databases as a natural extension, so I had mucked around with various databases before, including relational ones, but what immediately appealed about Heurist was its ability to deal with both time and space, making it uniquely suited for cultural heritage. Heurist was a wonderful assistance to the World Heritage project, earning lavish praise from the ICOMOS assessor. I also used Heurist for my PhD project (at the University of Sydney) on the lithics of Bahrain, which incidentally entailed creating a database of all the known archaeological sites in Bahrain (670 sites, by the time I finished my PhD in 2016). We were also creating a National Sites Database for Bahrain using Heurist, work that was sadly abruptly ended by the Arab Spring of 2011.

I have been an enthusiastic advocate of Heurist ever since I first encountered it, especially for those working in the realms of archaeology and cultural heritage (where I can speak with some experience that it is far and away the best knowledge management system around). However, I clearly remember my early days of using Heurist, where despite having had some experience with databases, I struggled to wrap my head around what was an entity, which were attributes and how best to structure my data, given my particular dataset. In fact, I believe that one of Heurist’s strengths is that because it doesn’t warp your processes to fit its own structure, like many other systems out there do, using Heurist leads one to a deeper understanding of one’s own dataset than any other system I know. Once one has mastered the basic concepts and seen how they work with one’s own data, one really understands what data one has, what one can do with it and new research questions grow naturally as one works with the data – an ideal methodology, really.

I am now hoping to use the skills that I’ve acquired to help others and to make learning how to use Heurist effectively as easy as possible. Heurist has such an enormous depth of capability that it is often not immediately obvious to people encountering it for the first time. Heurist is incredibly tolerant and resilient, allowing one to adjust the structure of one’s database as you go, even once one has entered data, making it a perfect environment to explore and experiment whilst learning; however, as with anything else, understanding what are often several ways of doing things and techniques for getting the best out of one’s data can save enormous amounts of time, so I will be helping the rest of the Heurist team to develop ways to share knowledge of those aspects with other users.

I have been based in Brisbane, Australia, since 1998 (aside from a sojourn in Saudi Arabia and Bahrain between 2006 and 2011), so if you’re in Australia or NZ we may meet up in person at some stage too!